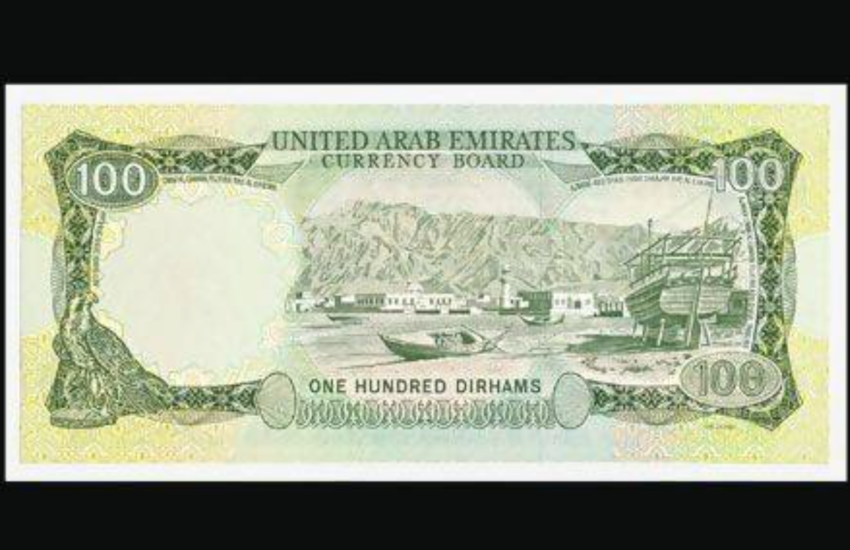 The United Arab Emirates is a prospering economy with its own currency norms and regulations. The region’s currency, the dirham, came into existence on May 20, 1973, two years after the formation of the country. Previously, currencies like the rupee, dinar and Maria Theresa silver thalers were used for transactions in the UAE.

Let us take a look at one of the highest currency denominations in UAE, the Dh100. It was the highest denomination in general circulation when it was introduced in the year 1973. Originally, the currency note was green and somewhat similar, in appearance, to today’s Dh10. It featured the port of Khor Fakkan and was used by natives from 1973 until 1982.

The Dh100 depicted a charming scene of Khor Fakkan on the Gulf of Oman on it’s English language face, portraying a dhow and buildings like a mosque and the ubiquitous fish market.

Following this, the note underwent design changes in 1982, turning the Dh100 note into the familiar pink or pale red that is in circulation today.

While the Arabic face features Al Fahidi Fort in Dubai, which used to be the abode of the emirate’s Ruler and now the Dubai Museum, the reverse face depicts the World Trade Centre which was, previously, the tallest building in the Middle East and a mark of Dubai’s extraordinary progress in less than 50 years of existence.

So, does your wallet have one of the new versions of the Dh100 notes? It is highly likely if you have made any recent withdrawals.

The second version was released in 2018, in honour of the Year of Zayed and the 100th anniversary of the Founding Father’s birth. In the new version, we can see that the World Trade Centre on the English side has been interchanged with an image of Sheikh Zayed Bridge in Abu Dhabi, and the reverse side portrays the official symbol of the Year Of Zayed, alongwith his portrait.

So, do you have the currency in your wallet? Take a look!