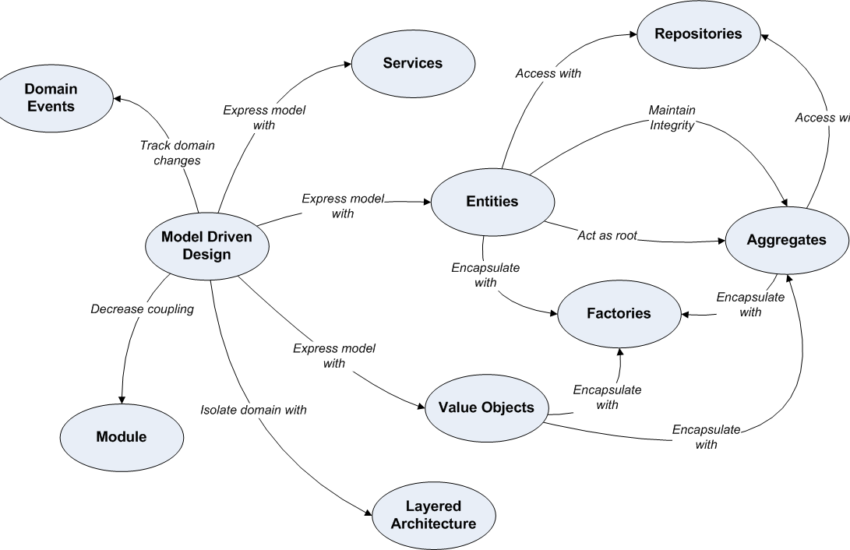 We had discussed “Strategic Design” in the previous post. Once we have our bounded-contexts and context-mapping ready, then we can go with the implementation.

In this part, I will continue with one of the most important things to know about DDD before you go further with your implementation. First things first: you must know the DDD building blocks below:

Fasten your seatbelts!. We’re going through the details of those blocks now.

An entity is a plain object that has an identity (ID) and is potentially mutable. Each entity is uniquely identified by an ID rather than by an attribute; therefore, two entities can be considered equal (identifier equality) if both of them have the same ID even though they have different attributes. This means that the state of the entity can be changed anytime, but as long as two entities have the same ID, both are considered equal regardless what attributes they have.

Value objects are immutable. They have no identity (ID) like we found in entity. Two value objects can be considered equal if both of them have the same type and the same attributes (applied to all of its attributes).

There are often uses for a thing like message passing and in fact, this is particularly useful in the API layer within an onion architecture to expose your domain concepts without necessarily exposing the immutable aspect.

Some benefits of value objects:

The other thing is that all operations within the domain should, where possible, go through an aggregate root. Factories, repositories, and services are some exceptions to this, but whenever possible, if you can create or require that an operation goes through the aggregate root, that’s going to be better.

Repositories are mostly used to deal with the storage. They are actually one of the most important concepts on the DDD because they have abstracted away a lot of the storage concerns (i.e. some form/mechanism of storage).

The repository implementation could be a file-based storage, or database (SQL-/NoSQL-based), or any other thing that is related to storage mechanism, such as caching. Any combination of those is also possible.

A repository should not be confused with the data store. A repository job is to store aggregate roots. Underneath that, repositories implementation may actually have to talk to multiple different storage locations in order to construct the aggregates. Thus, a single aggregate root might be drawn from a REST API, as well as a database or files. You may wrap those in something called the data store, but the repository is sort of a further layer of an abstraction on top of all those individual data stores. Usually, I implement the repository as an interface within the domain/domain services layer within onion architecture, and then the implementation logic of the repository interface is going to be defined in the infrastructure layer.

The factories are used to give an abstraction to the object construction (see factory design pattern from GOF).

A factory can also potentially return an aggregate root or an entity, or perhaps a value object.
Often times, when you need a factory method for an aggregate root, it will be rolled into the repository. So, your repository might have a finder create method on it.

Usually, factories also implemented as an interface within the domain/domain services layer with the implementation logic will be defined in the infrastructure layer.

I often found that many developers use term VO (value objects) and DTO (data transfer object) interchangeably. They think both are just the same. This is quite annoying for me. I’d like to clarify here that both refer to the different things.

As depicted in the picture below, VO and DTO are subsets of a POJO/POCO. An entity is also a subset of POJO/POCO.

In the above depiction, POJO and POCO can be interchangeably used. Both are referring to similar things. Both are just domain objects that mostly represent the domain/business object within the business application.

As mentioned earlier, DTO, VO, and entity are just a subset of POJO/POCO. However, they are really different things as described below:

DTO is merely a stupid data container (only holds data without any logic). Thus, it’s anemic in general (only contains attributes and getter/setter). DTO is absolutely immutable. Usually, we use DTO to transfer the object between layers and tiers in one single application or between application to application or JVM to JVM (mostly useful between networks to reduce multiple network call).

VO is also immutable, but what makes it different than DTO is that VO also contains logic.